After the newbies joined the Team SpongeBob, Squilliam invited SpongeBob and his friends, except Squidward to go to the Grand Ball party.

The episode starts in the Krusty Krab when SpongeBob and Takeshi are back and the newbies introducing themselves.

After the intro and the title card, the blue lightning with white streak appears, then the mailman just sent the gang a mail, except Squidward. SpongeBob walks to grab and open the mail. SpongeBob explains what the mail says, the gang invited them to the Grand Ball, but it didn't invited Squidward, which made Squidward sad.

Later that night, the gang went to the white castle, except Squidward. But Ryan almost forgot to bring his Lamp to the party.

Meanwhile in Krusty Krab, Squidward cries because he didn't even get invited. He decided to get revenge on Squilliam for treating him in the worst way and grab an axe to destroy the party.

Meanwhile at inside the castle, the gang are already got in, but Storm Trooper won't let them and tried to arrest them. Ryan Higa used Kamehameha towards Storm Trooper.

In the hyperspace, Ian fights with Cyrax while Anthony fights with Sektor. Ian finished Cyrax and Sektor by using Kamehameha.

Back at the party, SSJG SpongeBob back in here, but Cyber Sub-Zero is gone. The sillhouette of Cyber Sub-Zero told SSJG SpongeBob to remember that great power comes with great responsibility and disappears. SSJG SpongeBob turns back into normal. Smosh then disappears and thanking SpongeBob for everything. Squilliam jumps to the top and scolds Squidward by asking why did he destroy his Grand Ball. Squidward answers that he is ugly then him. The blue lightning with white streak zapped towards Squilliam. The gang decided to have some fun and SpongeBob asked Squidward what is he gonna do. Squidward used his bomb to destroy the ball, but SpongeBob warned him not to blow up the party and Squidward doesn't listen to him and explode the party. 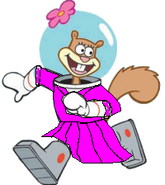 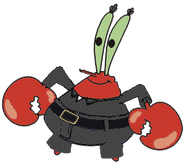 Retrieved from "https://spongebob-s.fandom.com/wiki/The_Grand_Ball_(Episode)?oldid=6956"
Community content is available under CC-BY-SA unless otherwise noted.