Takeshi Hongo is the main protagonist of Kamen Rider and main character of SpongeBob SquarePants S. He is a friend of SpongeBob who helped him battled Galactic Empire.

In episode 2, he (as Kamen Rider Ichigo) kicked Diend from shooting them to tell them not to give them and he believes them until he disappears.

In episode 5, he transformed into Kamen Rider Ichigo to help SpongeBob and fight with Super C.O.V.. Super C.O.V. tried to shoot Ichigo with Flash C.O.V. Shot, but dodged it. Ichigo finally finished Super C.O.V. with his Rider Kick. SpongeBob wakes up and thanking Ichigo for helping. SpongeBob asks where is everyone, but Ichigo don't know. Ichigo gives SpongeBob a Nasty Patty to help him find everyone as an evidence. Then, the illusion of Gatanozoa appears and tell them that they cannot save their friends. SpongeBob asks who is that guy. The Element of Insanity appears and shoot the nasty patty, which made SpongeBob lost his evidence. Ichigo asks SpongeBob to combine their powers, but the Element of Insanity won't let them, and both of them dodged it. Ichigo and SpongeBob kicked them with Rider SpongeBob Double Kick and explodes. SpongeBob learns a teleportation and teleports himself and Ichigo to Netherrealm. In the Nether, SpongeBob and Ichigo are finally in the netherrealm. When they are about to walk, Rain, Reptile, and Ermac blocked them and prepare to fight.

In episode 6 when SpongeBob and he (as Ichigo) fight with Rain, Reptile, and Ermac in Netherrealm. Ermac tried to attack SpongeBob, but Ichigo punched him and let SpongeBob go while Reptile disappears. Ichigo punched Ermac with Rider Punch and Ermac falls off to the lava. Reptile appears behind SpongeBob and SpongeBob kicks him. Reptile tried to shoot SpongeBob with his green ball, but SpongeBob blocked the attack with his Bubble Shot. SpongeBob shoot Reptile with his spatula by using Spatula Ray to defeat him, which made Reptile fall off to lava. Rain tried to shoot SpongeBob with his Blue Laser, but it made SpongeBob grow bigger and bursts the laser towards Rain and Rain falls off. SpongeBob and Ichigo finally made to save their friends, but the lightning just appears and King of Mons block their way. King of Mons attacked them with his Climate Beam. SpongeBob and Ichigo woke up. SpongeBob used his spatule to throw a fire at King of Mons and burned him. King of Mons separate and summon his minions, Bajiris and Scylla. Scylla attack SpongeBob while Bajiris attack Ichigo. SpongeBob and Ichigo fight with Bajiris and Scylla. Ichigo finished Bajiris with Rider Kick while SpongeBob used his size enlargement to stomp Scylla. SpongeBob and Ichigo combined their powers and finished King of Mons with Rider SpongeBob Double Kick. Then, Eleking appeared behind them and shoot Ichigo with his Light Blade, but Ichigo punched the attack towards him. Eleking wrapped Ichigo and tried to electrocuted him with his Electric Tail, but Ichigo destroy his tail and punched Eleking to the lava and got burned. Then Ichigo and SpongeBob went to the castle where their friends got kidnapped. At the outside of the castle, they made it. Ichigo lift the cage where their friends hold captive in the castle and put on. SpongeBob then get in the cage through Laser Jail and freed his friends. Noob Saibot reappeared in Nether again and tried to shoot Ichigo with his silver star, it made SpongeBob shocked and protect Ichigo from the silver star and throw it into the lava. Then, Sub-Zero reappeared as Cyber Sub-Zero and fight with his brother. Cyber Sub-Zero froze Noob Saibot with Freeze Ray, then Cyrax and Sektor reappeared after they got revived. Cyrax and Sektor used blue tail whip to capture SpongeBob, so Ichigo decided to save SpongeBob by kicking their hands with Rider Kick. Cyber-Sub Zero fight with Cyrax and Sektor, and got defeated. Of course, Cyber Sub-Zero forgot about Noob Saibot and decided to finish by kick him. SpongeBob asks what happened and what is that. Then, Gatanozoa appears and ordered Cyrax and Sektor to finish SpongeBob. Sektor teleported while Cyrax holding SpongeBob. Then, both of them separate SpongeBob's body and throw the body to the lava. Gatanozoa disappears and Godzilla appeared to reattached SpongeBob's body and revived him. SpongeBob's body was put on Godzilla's body. Godzilla finished Cyrax and Sektor by using Blue Spiral Breath and exploded. Shang Tsung appears to take over Godzilla's soul and disappears. Shang Tsung using fire breath, but Cyber Sub-Zero froze it. Gatanozoa reappeared and summon Dragon King Onaga. SpongeBob reappeared as SSJG SpongeBob and fight with Dragon King Onaga. Onaga spits a big fire at SSJG SpongeBob, but it didn't affect him. SSJG SpongeBob using Mebium Shoot to attack Onaga. SSJG SpongeBob jumps and using Zepellion Ray against Onaga. Lastly, SSJG SpongeBob using SpongeBob Kick to finished him. Because of that, the gang and Cyber Sub-Zero got teleported from Nether to the Krusty Krab. At the Krusty Krab, the gang is saved once more. Cyber Sub-Zero leaving the Krusty Krab and SSJG SpongeBob turned back into normal. Ichigo turned back into Takeshi Hongo.

In episode 7 when the gang are still in Krusty Krab, SpongeBob asked what is this place and said it doesn't looked like his world. Takeshi said that they can't find the answer and walks out of the Krusty Krab. At the outside of the Krusty Krab, Squidward asked if they can talk about this later. Gudon, Bemstar, Antlar, Sadora, Red King, and Twin Tails appeared at Bikini Bottom. SpongeBob have to defeat them, but Patrick won't let him and SpongeBob ignored him. Bemstar tried to shoot SpongeBob with his Bemstar Beam, but SpongeBob dodged it. Antlar shoot Magnetic Beam up to the sky, but SpongeBob stopped the attack. Suddenly, a man named Shin Asuka transformed into Ultraman Dyna and fight with five of them. Dyna shoot Bemstar with Dyna Slash. Sadora pinched Dyna with his Multi-layered Below's Pinch, then Bemstar fly and kick Dyna off. Bemstar accidentally bumped into Sadora. Redking fight with Dyna and then Dyna used the Dyna Slash against Redking. Gudon used his Oscillatory Tentacle Excavator to catch Dyna, but Dyna dodged it. So, Dyna lift Gudon and throw off from behind. Antlar disappeared and SpongeBob warned Dyna that Antlar is behind him. Antlar tried to attack him but Dyna shoot Antlar with Dyna Slash. Dyna then used Dynamic Ray to finish Twin Tails, Bemstar, Sadora, and Gudon. Then, Redking wakes up and the yellow lightning zapped on Redking then transformed into EX Red King. EX Redking started to fight with Dyna and defeated him with Flame Road. When EX Redking are about to punch Dyna with his fist, SpongeBob throw a silver star at him, made EX Red King mad at SpongeBob, so SpongeBob turned into SSJG SpongeBob and fight with EX Red King. Zetton appeared and throw One Trillion Degree Fireball at SSJG SpongeBob, but SSJG SpongeBob dodged it. SSJG SpongeBob shoot Zetton with Mebium Shoot, but it didn't affect him. Zetton tried to shoot SSJG SpongeBob with Zetton Final Beam, but SSJG SpongeBob dodged it again. SSJG SpongeBob shoot Zetton with M78 Ray and exploded. SSJG SpongeBob shoot EX Red King with Photon Edge, but it absorp the power, so EX Red King using a fire from his hand towards SSJG SpongeBob, but it didn't affect him, so SSJG SpongeBob using Stronger Electro Fire towards EX Red King. SSJG SpongeBob finishing EX Red King by using SpongeBob Punch. Dyna turned back into Asuka and thanking SpongeBob for saving his life. SSJG SpongeBob turned into normal. Asuka teleported SpongeBob and himself to somewhere else. After that, the gang proceed to go back to the Krusty Krab. Back in the Krusty Krab, the gang is back in here. Patrick take out his Krabby Patty and eats it. Later, he turned into Ichigo to visits Yokohama to save Ryan, Asuka, SpongeBob from Plankton by blocked the attack with his Rider Kick. Asuka transform into Dyna and fight with Plankton. Then, Dyna finished Plankton with his Solgent Ray, made Plankton back to normal. Dyna turns back into Asuka and the gang proceed to walk to Kurumi. SpongeBob teleports the gang back to Bikini Bottom.

In episode 8 in the Krusty Krab when SpongeBob and Takeshi are back and the newbies introducing themselves. The blue lightning with white streak appears, then the mailman just sent the gang a mail, except Squidward. SpongeBob walks to grab and open the mail. SpongeBob explains what the mail says, the gang invited them to the Grand Ball, but it didn't invited Squidward, which made Squidward sad. Later, Ichigo and Gaim went to the party to saved SSJG SpongeBob by using their Double Rider Kick. Ichigo, Gaim, and SSJG SpongeBob finished Zombie Liu Kang by using Rider SpongeBob Triple Kick on him. SSJG SpongeBob turned back into normal and asked both that he thought they didn't wan't to come. Gaim answers that they have to come because there was an emergency and fight together. The sillhouette of Gatanozoa appears that the sorcerer is here to take away the souls. SpongeBob reminds that the sorcerer was Shang Tsung. Shang tried to shoot SpongeBob with his fireball, but Gaim protect him to sacrifice himself. Shang says "Your soul is mine!", but SpongeBob won't let him take Gaim's soul and fight with Shang. SpongeBob and Shang teleported at hyperspace and fight. SSJG SpongeBob teleported back at the party, but Cyber Sub-Zero is gone. The sillhouette of Cyber Sub-Zero told SSJG SpongeBob to remember that great power comes with great responsibility and disappears. SSJG SpongeBob turns back into normal. Smosh then disappears and thanking SpongeBob for everything. Squilliam jumps to the top and scolds Squidward by asking why did he destroy his Grand Ball. Squidward answers that he is ugly then him. The blue lightning with white streak zapped towards Squilliam. The gang decided to have some fun and SpongeBob asked Squidward what is he gonna do. Squidward used his bomb to destroy the ball, but SpongeBob warned him not to blow up the party and Squidward doesn't listen to him and explode the party.

In episode 10, the souls of SpongeBob's friends just combined their powers for SpongeBob and Squidward. He also appeared in the flashback where SSJG SpongeBob defeated Dragon King Onaga.

In episode 1, another rider named Kamen Rider Ichigo kicks the Dimension Shoot and Diend to protect the gang. After that, Ichigo tells the gang to not let him doing madness in this world and believe in them. 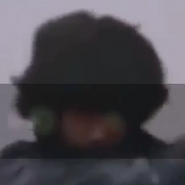