In episode 7, a man named Shin Asuka transformed into Ultraman Dyna and fight with five of them. Dyna shoot Bemstar with Dyna Slash. Sadora pinched Dyna with his Multi-layered Below's Pinch, then Bemstar fly and kick Dyna off. Bemstar accidentally bumped into Sadora. Redking fight with Dyna and then Dyna used the Dyna Slash against Redking. Gudon used his Oscillatory Tentacle Excavator to catch Dyna, but Dyna dodged it. So, Dyna lift Gudon and throw off from behind. Antlar disappeared and SpongeBob warned Dyna that Antlar is behind him. Antlar tried to attack him but Dyna shoot Antlar with Dyna Slash. Dyna then used Dynamic Ray to finish Twin Tails, Bemstar, Sadora, and Gudon. Then, Redking wakes up and the yellow lightning zapped on Redking then transformed into EX Red King. EX Redking started to fight with Dyna and defeated him with Flame Road. When EX Redking are about to punch Dyna with his fist, SpongeBob throw a silver star at him, made EX Red King mad at SpongeBob, so SpongeBob turned into SSJG SpongeBob and fight with EX Red King. Zetton appeared and throw One Trillion Degree Fireball at SSJG SpongeBob, but SSJG SpongeBob dodged it. SSJG SpongeBob shoot Zetton with Mebium Shoot, but it didn't affect him. Zetton tried to shoot SSJG SpongeBob with Zetton Final Beam, but SSJG SpongeBob dodged it again. SSJG SpongeBob shoot Zetton with M78 Ray and exploded. SSJG SpongeBob shoot EX Red King with Photon Edge, but it absorp the power, so EX Red King using a fire from his hand towards SSJG SpongeBob, but it didn't affect him, so SSJG SpongeBob using Stronger Electro Fire towards EX Red King. SSJG SpongeBob finishing EX Red King by using SpongeBob Punch. Dyna turned back into Asuka and thanking SpongeBob for saving his life. SSJG SpongeBob turned into normal. Asuka teleported SpongeBob and himself to somewhere else. In Yokohama, SpongeBob and Asuka teleported in here. Both of them jump on top of the buildings and landed in the sewer. Suddenly, a white army named Storm Trooper tried to shoot at Asuka, but Asuka shoot it as a defend. Storm Trooper called his friends to finished them, but a girl named Cure Marine shoot Storm Troopers with Precure Blue Forte Wave to protect SpongeBob and Asuka from them. Plankton appears at the sewer and enlarge himself to big to destroy Yokohama. Bane asks SpongeBob and Asuka to fight them, but some Japanese-American YouTuber named Ryan Higa fight with Bane and cloned himself to four. Bane tried to shoot Ryan, but Ryan dodged it. Ryan attacks Bane with his Kamehameha and explodes. After Ryan's clones disappears, Ryan told SpongeBob and Patrick to follow him up from the sewer. Back at the town, Plankton defeating the Pretty Cures, but Ryan, Asuka, and SpongeBob stop him. Plankton tried to shoot them, but Ichigo blocked the attack with his Rider Kick. Asuka transform into Dyna and fight with Plankton. Then, Dyna finished Plankton with his Solgent Ray, made Plankton back to normal. Dyna turns back into Asuka and the gang proceed to walk to Kurumi. SpongeBob teleports the gang back to Bikini Bottom.

In episode 9 at the Netherrealm, Hipporito, Shang Tsung, Kaito Kumon, Daiki Kaito, and Plankton go to the Earthrealm and show them. At the Bikini Bottom, they are landed here. Kaito transformed into Lord Baron, Daiki transform into Kamen Rider Diend, while Plankton grows bigger. They started to attack the Krusty Krab, but Cyber Sub-Zero saved the gang by defeating the villains, including him. Gatanozoa had enough and killed Cyber Sub-Zero, then disappears. After the five of the gang transformed themselves, Asuka fought with Plankton at Jellyfish Fields. Plankton shoot Dyna with his orange laser eye. Dyna finished Plankton by using Solgent Ray and explode him. Later, the gang are back at the Bikini Bottom. But, the blue lightning with streaks strike and made the big fusion monster appeared. Gatanozoa introduced the monster, his name was Five King. First, Dyna fight with him, but got shot by Ice Fire Combo Beam. Marine tried to shoot with her Precure Blue Forte Wave, but Gan Q (on Five King's left hand) suck the power and reflect towards her. Wizard tried to cast the spell on the fused kaiju, but Super C.O.V. (on Five King's torso) shoot him with his Flash C.O.V. Shot. Gaim tried to attack Five King by using Naginata Musou Slicer on him, but Golza (on Five King's head) fired Gol Melba Cannon on it. Golza then fired it back using a Gan Q Beam on Gaim, which made SSJG SpongeBob cried that Five King killed all of his friends thanks to him. SSJG SpongeBob tried to avenge them by using Mebium Shoot on Five King, but it didn't affect him. Five King used Combined Monster Assualt towards SSJG SpongeBob, which exploded the whole Bikini Bottom and made SSJG SpongeBob turned back into normal. SpongeBob started to crying because Five King destroyed Bikini Bottom and his friends, and run away like a baby. Five King continued to destroy the Bikini Bottom.

Teleportation
Add a photo to this gallery 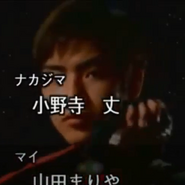 Add a photo to this gallery
Retrieved from "https://spongebob-s.fandom.com/wiki/Shin_Asuka?oldid=6994"
Community content is available under CC-BY-SA unless otherwise noted.