Sheldon J. Plankton was one of major antagonists of SpongeBob SquarePants S series. He is the founder and owner of Chum Bucket, and a long-time arch-nemesis of Eugene H. Krabs. He is also one of members of Galactic Empire.

In episode 1, he was seen planning to steal the Krabby Patty Secret Formula at Nether along with Hipporito, Kaito, and Daiki. But Gatanozoa sent Fire Golza to Earthrealm instead, causing Fire Golza to jumpscare the viewer at the end of the episode.

In episode 3, Plankton appears and turned into big. Plankton destroys Jellyfish Fields from his eye and teleport back to the Nether to informed the villains that he destroyed the Jellyfish Fields.

In episode 4 in the Nether when Kaito asked Plankton if Count Dooku had been killed Mileena, but Plankton answers he is. Dooku appears for his turn and flying up to the earth. Lord Baron said that he's going to kill them. Later after Baron teleports back to the Nether, Plankton asks what is going on. Baron appears that he failed again.

In episode 7, Plankton appears at the sewer and enlarge himself to big. Plankton tries to destroy Yokohama, but the Pretty Cures are going to fight him. Plankton defeating the Pretty Cures, but Ryan, Asuka, and SpongeBob stop him. Plankton tried to shoot them, but Ichigo blocked the attack with his Rider Kick. Asuka transform into Dyna and fight with Plankton. Then, Dyna finished Plankton with his Solgent Ray, made Plankton back to normal.

In episode 9 at the Netherrealm, Hipporito, Shang Tsung, Kaito Kumon, Daiki Kaito, and Plankton go to the Earthrealm and show them. At the Bikini Bottom, they are landed here. Kaito transformed into Lord Baron, Daiki transform into Kamen Rider Diend, while Plankton grows bigger. They started to attack the Krusty Krab, but Cyber Sub-Zero saved the gang by defeating the villains, including him. Gatanozoa had enough and killed Cyber Sub-Zero, then disappears. After the five of the gang transformed themselves, Plankton fought Dyna at the Jellyfish Fields. Plankton shoot Dyna with his orange laser eye. Later, Dyna finished Plankton by using Solgent Ray and explode him.

In episode 11, he is seen laughing with Hipporito, Daiki, and Shang in hell.

In episode 3, He once back again to Seek his Revenge to Krabs for His Failure to Steal Formula a whole time, He met Gatanozoa Somewhere else the Gatanozoa Tell him that he had a Same way with Plankton, Plankton gained the New Power from Gatanozoa that can Increase himself to an Giant and Destroy Jellyfish Fields, He was Stronger than before even 6 of Team Spongebob has to Gathering force to Defeat him Once. Until he was Defeated he had been Send back to his Empire. 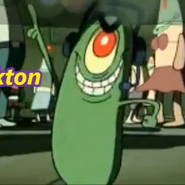