Shang Tsung was one of the antagonists of SpongeBob SquarePants S. He is also one of the members of Galactic Empire.

In episode 7, the Storm Trooper got fall down at Yokohama. Shang Tsung appears to take over Storm Trooper's soul and disappears.

In episode 9 at the Netherrealm, Hipporito, Shang Tsung, Kaito Kumon, Daiki Kaito, and Plankton go to the Earthrealm and show them. At the Bikini Bottom, they are landed here. Kaito transformed into Lord Baron, Daiki transform into Kamen Rider Diend, while Plankton grows bigger. They started to attack the Krusty Krab, but Cyber Sub-Zero saved the gang by defeating the villains, including him. Gatanozoa had enough and killed Cyber Sub-Zero, then disappears. After the five of the gang transformed themselves, Shang fought Wizard at the Floating Island. Shang throws a fireball at Wizard, but he cast Wizard Shield to protect himself. Later, Wizard finished Shang by using Wizard Kick. Shang got kicked and fall of to the spikes and dying.

In episode 11, he is seen laughing with Plankton, Daiki, and Hipporito in hell. 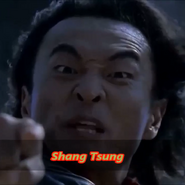 Add a photo to this gallery
Retrieved from "https://spongebob-s.fandom.com/wiki/Shang_Tsung?oldid=7010"
Community content is available under CC-BY-SA unless otherwise noted.