Sektor is one of antagonists from SpongeBob SquarePants S. He is also a member of Galactic Empire along with Cyrax.

In episode 3 at Jellyfish Fields, the gang saw Sektor appears and shots the missile at them, but Patrick bump the missile back towards Sektor with his big tummy. Sektor then tried to kill Patrick with his double red light saber, but Patrick dodged it and cut his head off and Sektor explodes.

In episode 9, the villains from the past are revived from their death such as Count Dooku, Cyrax, Sektor, Zetton, Zombie Liu Kang, EX Red King, Scorpion, Bemlar, and Cyber Smoke. The veteran riders begin to fight with revived monsters, villains, and the Storm Troopers, then defeated them except the last Storm Trooper, but got burned by Tyrant.

In episode 10, he appeared in the flashback where he and Cyrax got defeated and SSJG SpongeBob defeated Dragon King Onaga.

In episode 11, he is seen laughing with the rest of the monsters and villains from the series.

In episode 5, Sektor appears and fight with SpongeBob. Sektor fight used his two Red Light Sabers and SpongeBob fight used his spatula. Patrick appears to help SpongeBob and Sektor throw a missile at him, but Patrick grabbed the missile and explode him.

Blue Tail Whip
Add a photo to this gallery

Double Red Light Saber
Add a photo to this gallery 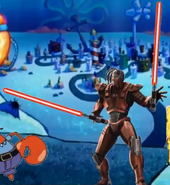 Double Red Light Saber
Add a photo to this gallery

Retrieved from "https://spongebob-s.fandom.com/wiki/Sektor?oldid=7275"
Community content is available under CC-BY-SA unless otherwise noted.