In episode 1 when Bemlar was about to tell the truth, Scorpion killed him instead. He tried to kill SpongeBob, but Patrick defended him. SpongeBob avenge Patrick by killing him.

In episode 5, he was seen helping Sub-Zero committed suicide.

In episode 9, the villains from the past are revived from their death such as Count Dooku, Cyrax, Sektor, Zetton, Zombie Liu Kang, EX Red King, Scorpion, Bemlar, and Cyber Smoke. The veteran riders begin to fight with revived monsters, villains, and the Storm Troopers, then defeated them except the last Storm Trooper, but got burned by Tyrant.

In episode 11, he is seen laughing with the rest of the monsters and villains from the series.

In episode 1, the bubble just land down and made Bemlar pops out from the bubble. SpongeBob asks Bemlar who he is. But Bemlar introduces himself until he got killed by someone with a fireball. The big flame appeared from behind and it was shown that Scorpion killed Bemlar and tried to kill SpongeBob. Meanwhile, Patrick saw SpongeBob is about to kill and protect him from Scorpion. SpongeBob got Patrick, then Scorpion turned into skull form and tried to shoots SpongeBob with his fire, but it got absorped. SpongeBob shoots Scorpion with his Multiple Bubble Shot, which got him burned and exploded. 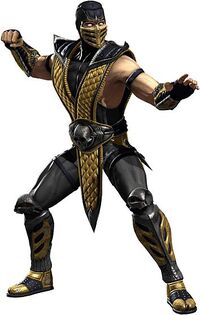 Hook
Add a photo to this gallery

Hook
Add a photo to this gallery

Retrieved from "https://spongebob-s.fandom.com/wiki/Scorpion?oldid=7094"
Community content is available under CC-BY-SA unless otherwise noted.