Ryan Higa, also known as Nigahiga on YouTube was an American-Japanese YouTuber who joined YouTube since 2006. He is also a friend of SpongeBob and a member of Team SpongeBob.

In episode 7, a Japanese-American YouTuber named Ryan Higa fight with Bane and cloned himself to four. Bane tried to shoot Ryan, but Ryan dodged it. Ryan attacks Bane with his Kamehameha and explodes. After Ryan's clones disappears, Ryan told SpongeBob and Patrick to follow him up from the sewer. Back at the town, Plankton defeating the Pretty Cures, but Ryan, Asuka, and SpongeBob stop him. Plankton tried to shoot them, but Ichigo blocked the attack with his Rider Kick. Asuka transform into Dyna and fight with Plankton. Then, Dyna finished Plankton with his Solgent Ray, made Plankton back to normal. Dyna turns back into Asuka and the gang proceed to walk to Kurumi. SpongeBob teleports the gang back to Bikini Bottom.

In episode 9, the villains attack the Bikini Bottom and it made an earthquake at the Krusty Krab. Cyber Sub-Zero appears to defeat Shang, Diend, Baron, and Hipporito, then froze Plankton with Freeze Ray. The sillhouette of Gatanozoa appears and killed Cyber Sub-Zero then disappears. But someone says "Hold on!", which means that the veteran riders are here to fight them. But Storm Troopers appears to kill the riders and Tyrant appears to kill them. They got teleported to somewhere else. The five of the gang started to fought the five villains. Later, the gang defeated them and back at the Bikini Bottom. But, the blue lightning with streaks strike and made the big fusion monster appeared. Gatanozoa introduced the monster, his name was Five King. First, Dyna fight with him, but got shot by Ice Fire Combo Beam. Marine tried to shoot with her Precure Blue Forte Wave, but Gan Q (on Five King's left hand) suck the power and reflect towards her. Wizard tried to cast the spell on the fused kaiju, but Super C.O.V. (on Five King's torso) shoot him with his Flash C.O.V. Shot. Gaim tried to attack Five King by using Naginata Musou Slicer on him, but Golza (on Five King's head) fired Gol Melba Cannon on it. Golza then fired it back using a Gan Q Beam on Gaim, which made SSJG SpongeBob cried that Five King killed all of his friends thanks to him. SSJG SpongeBob tried to avenge them by using Mebium Shoot on Five King, but it didn't affect him. Five King used Combined Monster Assualt towards SSJG SpongeBob, which exploded the whole Bikini Bottom and made SSJG SpongeBob turned back into normal. SpongeBob started to crying because Five King destroyed Bikini Bottom and his friends, and run away like a baby. Five King continued to destroy the Bikini Bottom.

In episode 11, his powers are still remained in Squidward S' powers. Later after the final battle, SpongeBob S, Squidward S, and their friends are seperated from their powers. Drive turns back into Shinnosuke and leaves, and as for Takeshi, Over Lord Kouta, Cyber Sub-Zero, and Asuka leaves too. Then the gang proceed to fix the Bikini Bottom. Many days later, everyone had a vacation at Goo Lagoon now. But, Rainbow Tyrant come to the beach and said that he feels good now, which made all of the characters from the series laughing. After the laughing is over, Rainbow Tyrant leaves, thus the end of the old series. 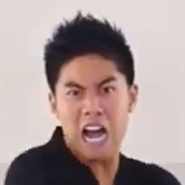 Ryan in his formal clothes during The Grand Ball Party. (Source: The thumbnail of Ryan Higa's video, Ryan Higa for President!)

Ryan in his swimsuit.
Community content is available under CC-BY-SA unless otherwise noted.
Advertisement