Kamen Rider ZX is the tenth Kamen Rider who made his debut in Birth of the 10th! Kamen Riders All Together!!.

In episode 11, his powers are still remained in Squidward S' powers. Later after the final battle, SpongeBob S, Squidward S, and their friends are seperated from their powers. Drive turns back into Shinnosuke and leaves, and as for Takeshi, Over Lord Kouta, Cyber Sub-Zero, and Asuka leaves too. Then the gang proceed to fix the Bikini Bottom. Many days later, everyone had a vacation at Goo Lagoon now. But, Rainbow Tyrant come to the beach and said that he feels good now, which made all of the characters from the series laughing. After the laughing is over, Rainbow Tyrant leaves, thus the end of the old series.

All Rider Kick
Add a photo to this gallery 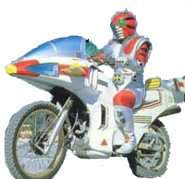 ZX riding with his Helldriver.
Add a photo to this gallery
Retrieved from "https://spongebob-s.fandom.com/wiki/Kamen_Rider_ZX?oldid=7246"
Community content is available under CC-BY-SA unless otherwise noted.