Daiki Kaito is one of antagonists in SpongeBob SquarePants S who works for Gatanozoa as the member of Galactic Empire.

In episode 1, he was seen planning to steal the Krabby Patty Secret Formula at Nether along with Plankton, Kaito, and Hipporito. But Gatanozoa sent Fire Golza to Earthrealm instead, causing Fire Golza to jumpscare the viewer at the end of the episode.

In episode 2, he (as Diend) stops the gang from fight with Fire Golza and ordered them to give him the formula. But they refused, so he has to kill them. Then Kamen Rider Ichigo stops him from doing so. Diend sends Gan-Q to suck the gang until it exploded. Then Kouta turns into Gaim and fights with Fire Golza. Gaim finished Fire Golza with Burai Kick. Gaim turns back to Kouta and said that it's his turn, which made Diend teleport away.

In episode 3 in Nether, he's back and failed. Plankton backs and informs both of them that he destroys Jellyfish Fields. Daiki asks if where Hipporito is.

In episode 4 in the Nether when Kaito asked Plankton if Count Dooku had been killed Mileena, but Plankton answers he is. Dooku appears for his turn and flying up to the earth. Lord Baron said that he's going to kill them. Later after Baron teleports back to the Nether, Plankton asks what is going on. Baron appears that he failed again.

In episode 5, he (as Diend) reappeared at the Krusty Krab and tell the gang and Sub-Zero that he's back. Diend tried to kill them with his Diend Blast, but Sub-Zero shot it with the Freeze Ray. Diend shoot Sub-Zero with Diend Blast again, but Sub-Zero protect himself with his Ice Clone and explodes. Diend disappears that he have to go now.

In episode 9 at the Netherrealm, Hipporito, Shang Tsung, Kaito Kumon, Daiki Kaito, and Plankton go to the Earthrealm and show them. At the Bikini Bottom, they are landed here. Kaito transformed into Lord Baron, Daiki transform into Kamen Rider Diend, while Plankton grows bigger. They started to attack the Krusty Krab, but Cyber Sub-Zero saved the gang by defeating the villains, including him. Gatanozoa had enough and killed Cyber Sub-Zero, then disappears. After the five of the gang transformed themselves, Diend fought with SSJG SpongeBob at the hyperspace. Diend shoot SSJG SpongeBob with his Dimension Shoot. SSJG SpongeBob releases his ultimate power named SpongeBob Dash. Then, SSJG SpongeBob finished Diend by using SpongeBob Kick.

In episode 11, he is seen laughing with Plankton, Hipporito, and Shang in hell.

In episode 2, the gang saw Fire Golza attacking the Bikini Bottom. The gang tried to stop him, but a rider named Kamen Rider Diend appears to tells the gang to give him the secret formula. The gang refuses to handle him over, so Diend have no choice but to kill them by using Dimension Shoot instead. Another rider named Kamen Rider Ichigo kicks the Dimension Shoot and Diend to protect the gang. After that, Ichigo tells the gang to not let him doing madness in this world and believe in them. Diend wakes up and summons Gan Q to sucked them into Hyperspace. Squidward got out of the Krusty Krab and asks what is going on here. Diend tells him that they are sucked in Gan-Q and told him to give him the formula. Squidward was about think of that will he do. Gan Q tries to shoot Squidward with Energy Eye Cannon Blast, but it got dodged. Squidward grabs the stick and hit Gan Q. It got exploded and get the gang out of Gan Q's body, which made Diend teleport and escapes.

In episode 6, Daiki Kaito encounters SpongeBob and reminds him that he is the Kamen Rider Diend with that gun. Daiki said that he is hunting for the ultimate treasure in the galaxy and told SpongeBob to not disturb his journey, then Daiki teleported away.

He is known for his arrogant personality. His mission is to travel through world to find an "Ultimate Treasure" as well "Krabby Patty Secret Formula" are one of those. 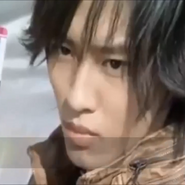 Add a photo to this gallery
Retrieved from "https://spongebob-s.fandom.com/wiki/Daiki_Kaito?oldid=7288"
Community content is available under CC-BY-SA unless otherwise noted.