The episode starts when SpongeBob and Patrick finally back at the Conch Street. SpongeBob told Patrick that he remembered that he keep his plane that used on "Creature from the Krusty Krab" and entering his house to find his plane. After get out from the house, SpongeBob show his plane, much to Patrick's pleasure. Haruto visits SpongeBob and Patrick and asks what are they doing. Patrick answers that SpongeBob just show his old plane that used for a long time. Haruto was about to used his Wizard Ring to eat the donut, but it won't work and teleported them to somewhere else.

After the intro and the title card, SpongeBob, Patrick, and Haruto got teleported in the Floating Island and passed through another dimension. Suddenly, Hipporito appears and Patrick runs then falls off. SpongeBob fights with Hipporito but it doesn't affect him. Hipporito traps SpongeBob with his capsule to trap him and turned him into a statue, which made SpongeBob can't get out of here. Haruto turned into Kamen Rider Wizard and also got trapped in the capsule as well. Patrick jumps on top of there to save them and got trapped in the capsule. Patrick then used Patrick Ninja Shuricane to destroy the capsule and attack Hipporito. SpongeBob and Wizard got out of the capsule. They finished it with Wizard's WizarSwordGun's Flame Shooting, SpongeBob's Bubble Shot, and Patrick's Blue Fire. Hipporito tried to shoot the attack by using Breast Crusher, but the combo attack is getting stronger and got defeated. When they asked the truth of Galactic Empire, Hipporito won't tell it and leaves. Later, Ultra Chew appeared and help them by telling them that they can go out is portal that will open in the sky and use the plane. SpongeBob acquired his plane and ride with Patrick and Wizard, who turns back to Haruto. At the sky, the portal opened and SpongeBob, Patrick, and Haruto entered the portal.

At the outside of Krusty Krab, SpongeBob, Patrick, and Haruto landed here and episode ends. 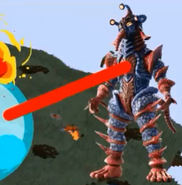 Retrieved from "https://spongebob-s.fandom.com/wiki/Another_Dimension?oldid=7279"
Community content is available under CC-BY-SA unless otherwise noted.